What is an esophageal pH test? 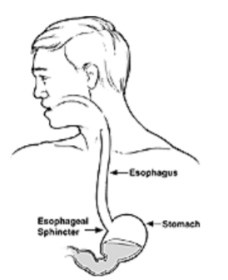 An esophageal pH test measures and records the pH in your esophagus to determine if you have gastroesophageal reflux disease (GERD). The test can also be done to determine the effectiveness of medications or surgical treatment for GERD.

What is esophageal reflux?

Esophageal reflux is a condition in which stomach acid refluxes or moves back into the esophagus (the "food pipe" leading from the mouth to the stomach).

What happens during esophageal reflux?

A specialized muscle, called the lower esophageal sphincter, is located where the esophagus meets the stomach (see figure). This sphincter opens to allow food and liquid to pass into the stomach, then closes. When the sphincter does not close tightly, food particles, stomach acid and other digestive juices can splash back up into the esophagus. When this happens, the condition is called gastroesophageal reflux. When reflux occurs on a regular basis, it can cause permanent damage to the esophagus. The esophageal pH test measures how often stomach contents reflux into the lower esophagus and how much acid the reflux contains.

How does the Bravo esophageal pH test work?

A small capsule, about the size of a gel cap, is temporarily attached to the wall of the esophagus during an upper endoscopy. The capsule measures pH levels in the esophagus and transmits readings by radio telecommunications to a receiver (about the size of a pager) worn on your belt or waistband. The receiver has several buttons on it that you will press to record symptoms of GERD such as heartburn (the nurse will tell you what symptoms to record). You will be asked to maintain a diary to record certain events such as when you start and stop eating and drinking, when you lay down, and when you get back up. This will be explained by the nurse.